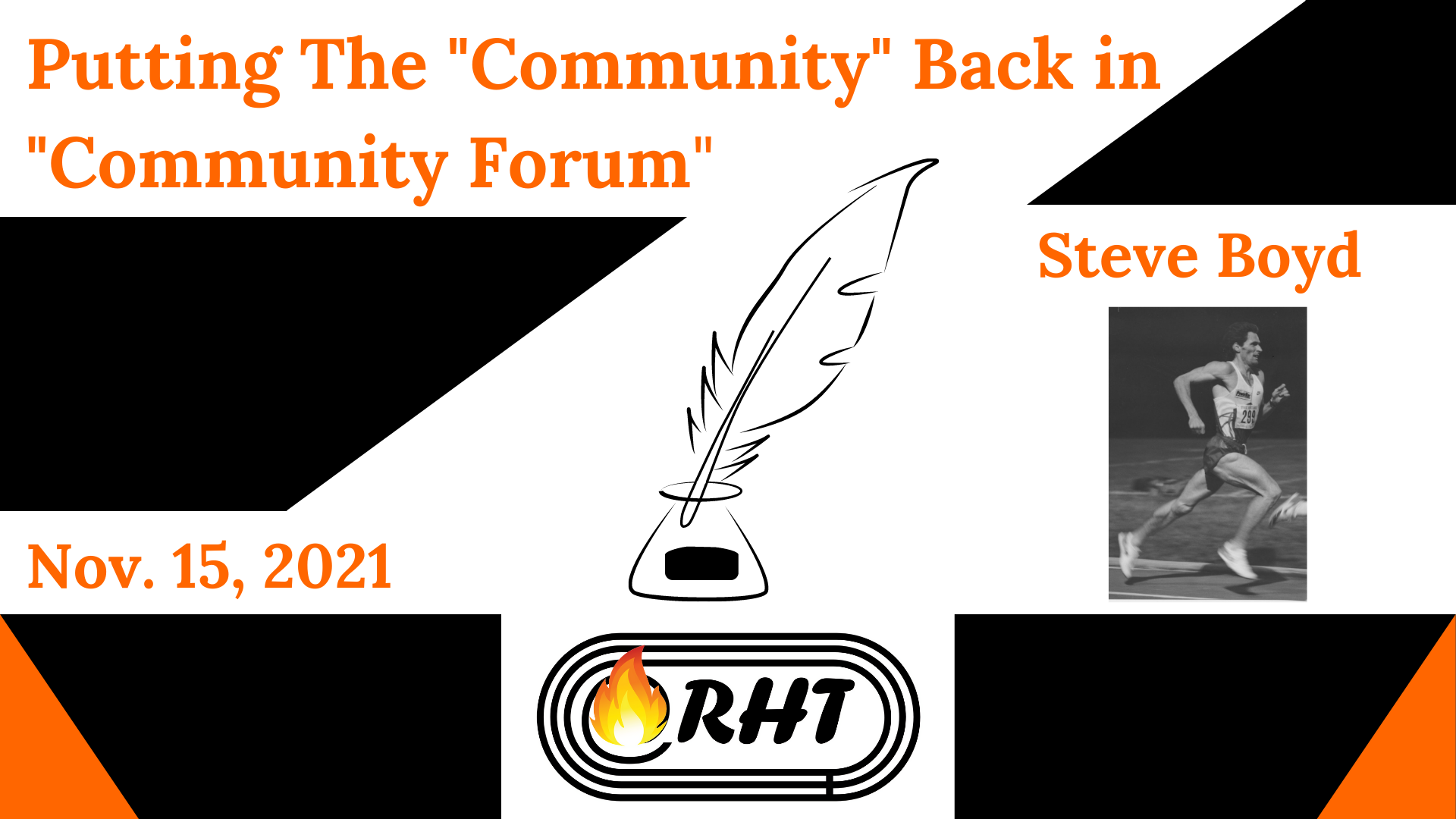 If you’re among the first wave of fans to discover and join RunningHotTakes.com, you’re almost certainly a veteran of Trackie.ca, and maybe even of TnF North, both now long defunct as nexuses for the sprawling community of Canadian athletics fanciers, participants, and functionaries. If your interest is in the distance running side of the sport, you are also very likely familiar with the longstanding US sport hub LetsRun.com. As such, you are no doubt intimately familiar with the very popular “message board/community forum” feature of all three sites, and with the seemingly endemic devolutionary tendencies of these experiments in online interaction. You are thus no doubt now wondering why anyone would want to create such a space anew, particularly in the increasingly acrimonious 2020s, where simple-minded labelling and other forms of word-cudgelling are what pass for “political” discussion, even between fully grown, often degree-holding, adults.

Why indeed? The answer starts with understanding what exactly went wrong with these earlier instantiations and what factors propelled their decline. How did the genuine early promise of the boards at LetsRun, TnF North, and Trackie eventually cede to juvenilia, political reaction, and cynicism? Did we just at some point begin to hate one another and become jaded with our own sport; or perhaps was the problem in the setup and incentive structures of the vehicles through which we met? If so, can these flaws be addressed and the early promise of the community forum concept be restored?

We should begin by recognizing the very real strengths of our community message boards—and they were, even in their final hours (or remain, as in the case of LetsRun.com) very useful vehicles for bringing fans together, sharing information, and celebrating the accomplishments of athletes in ways that simply would not have been possible without them. Indeed, having been without a community board in Canada for going on two years now has served to remind us of what we have lost.

The problem with all three of the abovementioned community forums was largely one of an ever increasing “noise-to-signal” ratio, with the noise becoming so great that many of those with less tolerance for it were sometimes pushed past the breaking point. Veterans of the boards, for example, will recall a time when more than a few of the sport’s luminaries and elder states-people—figures like legendary US coach Jack Daniels—would post routinely, and under their own names. But what was the cause of the steadily increasing noise? There are two reasons, one very simple and the other almost impossibly complex.

The simple reason is so obvious that it is easily missed: None of the community boards stood alone or were established for their own sake; all were embedded within larger sites that served other purposes, purposes that were and are somewhat at odds with ideal goal of a community online forum. If your goal in starting a running-focused website is to recruit athletes to your university (TnF North/U of Guelph), promote a suite of for-profit services (Trackie.ca), or simply to make as much money as possible (LetsRun.com), you’re going to have little or no incentive to encourage and maintain a high quality of engagement on your message board, especially if it means potentially reducing traffic. And you may even at times have an incentive to throttle important discussion and censor sensitive topics if/when these things threaten your core objectives. Thus, the simplest way to reduce noise on a community message board is to maintain its independent character. One way to do this is to ensure that your forum is cooperatively controlled by its users, so that its core purpose—acting as a space to discuss, celebrate, and promote the thing that brings its users together—is never subordinated to other concerns. And regular users will tend to have a bias in favour of quality over quantity when it comes to board content in any case.

The more complex reason for decline of the message board is deeply cultural, and accounts for the fraught state of internet-mediated communication in general: Our societies now exist in the shadow of intersecting existential crises, making us all more prone to be afraid of, suspicious of, and hostile towards one another. Faceless, anonymous communication, in freeing our collective Id, affords ample opportunity to vent these negative and destructive states of mind. Sport-oriented social media spaces, because they are attractive to younger men, represent a special and highly aggravated instance of this general phenomenon. On top of the precarity and anxiety we all feel, many younger men are experiencing an acute crisis of traditional gender privilege and expectations, which they sometime express in the form of ironic detachment, cynicism, and a libidinally-driven desire to transgress against what they see as forced norms of social decorum. In other words, many younger men today often feel an acute need to “mess” with things they feel they can’t or don’t want to be part of on equal terms. Sports forums, because their subject matter is coded masculine, are irresistible to younger men looking to express how things are with them, whether others want to hear it or not. Younger men (and the definition of “younger” seems to get older by the year!) are thus overwhelmingly responsible for the accumulation of noise on sports message boards, even those boards dedicated to less “alpha” sports like athletics. Any message board that wants to avoid that fate of LetsRun.com and Trackie.ca will have to take steps to “guy-proof” its space, even if this means becoming less attractive to many would-be participants.

The community forum of which you are, we hope, about to become a member goes a long way in avoiding the simple problem of mixed or compromised motives—it is collectively run by fans and is not-not-for-profit—and goes at least some of the way in addressing the more complex one—as you will see, there are many simple imbeds for guiding contributions in constructive directions and for discouraging flippant use. But in order to make the RunningHotTakes.com  community forum successful where its predecessors have failed, we will need to broaden its appeal beyond the traditional sports message board audience to include more non-traditional users, and more women athletes and fans in particular. This is an undoubtedly difficult challenge, but one we like to think that its possible to successfully address. We think our community is inherently different and will ultimately embrace the opportunity to interact in a less commercially driven and more “grown-up” space. Such a board will undoubtedly be less trafficked and “free-wheeling”; but, we think most of us realize by now that heavier traffic and less “inhibited” content is ultimately self-defeating if the goal of the endeavour is longer term sustainability.

So, we invite you to abandon your fears and enter the new community space at RunningHotTakes.com. Have a look around, then register, post, and offer comments and criticisms. In fact, if you think you have something useful to offer the whole Hot Takes enterprise, feel free to reach out about becoming a regular contributor to the collective. Our goal is to at some point host open meetings for interested parties to discuss issues, concerns, or ways we can improve the space.

For now, please enjoy, opine on, and celebrate Canadian athletics!