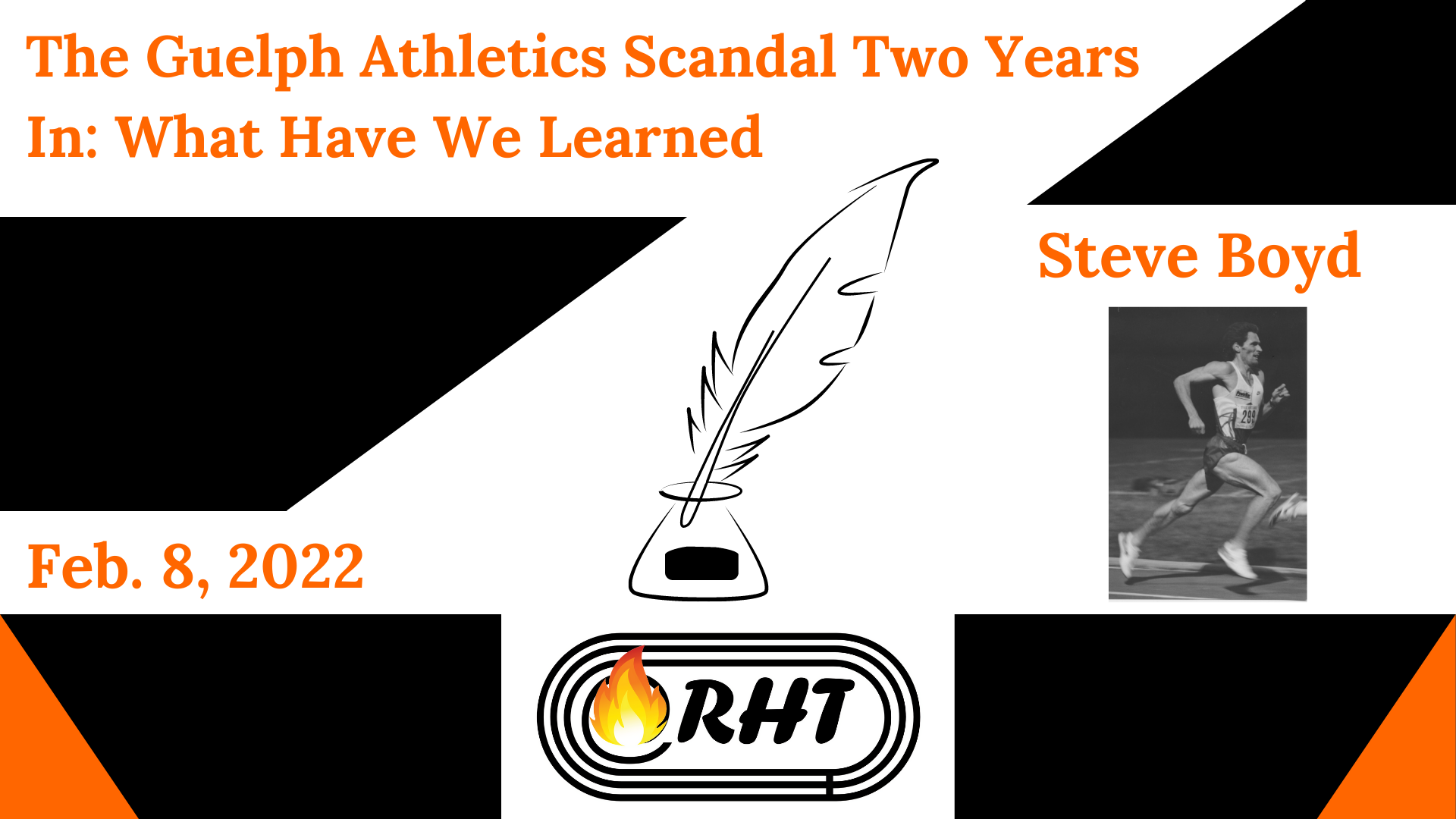 In the room of Canadian university athletics, it would seem, only the elephant remains.

Two years ago this week, the biggest and most salacious sports misconduct story in Canadian university athletics history broke on none other than front page of our putative national newspaper, the Globe and Mail. The now infamous story—written by former Canadian Running Magazine editor turned investigative journalist Michael Doyle—documented in painful specificity the sexual exploitation by her coach, Dave Scott-Thomas, of a then 17-year-old Megan Brown, a local distance running standout and, eventually, prize recruit to Scott-Thomas’ burgeoning powerhouse cross country and distance track program at the University of Guelph. But beyond the tragedy of Megan Brown, her stolen athletics career, and her subsequent mental health struggles, Doyle’s months-long digging uncovered evidence of an ongoing culture of systematic, performance-driven abuse and neglect of student athletes, to which several current and former team members, some speaking under their own names and others choosing to remain anonymous, were willing to attest in some detail. Indeed, a couple of weeks later, in a follow up piece in Huffpost Canada , recent Guelph alum Samantha Beattie would confirm the accuracy of Doyle’s portrait of the program, coming as close as legally possible to exposing the identities of Scott-Thomas’ key enablers within the program’s “integrated support team” (IST). But even this would turn out to be the only part of a much more sordid tale of abuse and neglect, one that appeared to implicate the upper reaches of Guelph Athletics administration.

In the days and weeks that followed, many secondary stories appeared in local and national media, including those of the firing and eventual banning from the sport entirely of Dave Scott Thomas; my firing from Queen’s University for unauthorized “public commentaries” on Dave Scott-Thomas and the University of Guelph; the call by hundreds of Guelph faculty for a full investigation of the university’s apparent failure to act on knowledge of Scott-Thomas’ abuse of Megan Brown as far back as 2005; and, Athletics Canada’s apparent knowledge and implicit condoning of Guelph’s non-handling of Scott-Thomas affair (indeed, “rewarding” may be a more accurate descriptor, as Athletics Canada (AC) continued to hand him ever greater resources and power within the sport, all of it indirectly benefitting his principle employer, the University of Guelph, even after gaining full knowledge of his highly questionable past– a time-bomb that, for reasons known only to it, AC was willing to leave ticking underneath its whole operation). In the spring of 2020, and in spite of the looming COVID-19 pandemic crisis, the forces of what could end up being a powerful wave of change within Canadian athletics were gathering.

But the anticipated wave never broke. To date, there has been no further inquiry of any kind into what happened at Guelph and within Athletics Canada, no public statements of accountability, and no professional sanctioning, symbolic or otherwise, of anyone in a position to have enabled or ignored the actions of Dave Scott-Thomas while he remained, for 14 years after his abuse of Megan Brown, the most powerful and influential figure in the Canadian distance running, if not in Canadian athletics itself. Indeed, revelations posted a year later by a group of women alums that Guelph athletes had consistently raised concerns, both formal and informal, about Scott-Thomas and his program were met with complete silence by a larger media that had only a few months prior dined out on this story, and with complete indifference within the online community of Canadian athletics. Even public demonstrations of solidarity by current Canadian university athletes provoked not even boilerplate statements of concern from the relevant administrative mouthpieces. Silence was the new order of the day.

Thus, two years on, the elephant of the Guelph scandal remains squarely in the room of Canadian athletics in general and university athletics in particular. In fact, the beast has only grown, having been fed by a steady stream of come-and-go scandals, followed up by the usual policy-speak platitudes and P.R. happy-talk. Except that now “the room” seems empty of all but the elephant; there have been fewer and fewer people with each passing month willing to acknowledge its presence, let alone take its measure.

So, what have we learned?

With the aid of a cascade of similar scandals both here and in the US involving abuse of the vulnerable and dodged accountability by the powerful, the failure of the Guelph/Scott-Thomas affair to produce meaningful change in the culture of Canadian athletics offers lessons big and small to those willing to receive them, including:

But the lessons of the Guelph scandal and others like it remain for athletes and coaches in other programs, current and future, to absorb. In the most general, practical terms, they are as follows:

As participants in sport, as in society at large, we need to learn, or perhaps re-learn, how to act collectively in response to abuse perpetuated by those in power before it happens. As things stand, our focus on individualism encourages people to “stay in their lane” and ignore the plight of others until it’s too late to act effectively.

You, as an athlete or coach, will eventually suffer if you let competitive success cause you to forget the real value of sport– not least because, in very short order, no one will really care who won and who lost, particularly if there was no honour in the winning.

Stand up for what’s right; believe and support one another even if it costs you something. (In fact, that it might cost you something is the best indication that it is worth doing.) Your “team spirit” means nothing if it falls apart when it matters most.

You are allowed to celebrate and take credit for a healthy team culture, but only if you are prepared to be accountable for an unhealthy one, and all that follows from it. And, yes, in sport as in life, you can be both a victim and an accomplice at the same time (we all are). Only taking responsibility redeems you.

Never entirely trust anyone who makes a living administering something you are willing to do for free; their values will never be completely aligned with yours, and they will ultimately not protect you if it costs them something. When forced to choose, they will protect their livelihoods and those of others like themselves, not you.